Hi! So instead of writing a more in-depth review of each of these series, I decided to just lump them all into one (although I reserve the right to review  them later). These, in my opinion, are the top 5 comics being published right now. (You’ll notice a lot of Marvel. I l like Marvel.So sue me.)

At number 5 is Marvel’s series starring Loki. For some reason I missed because I wasn’t paying attention to Thor enough, Loki was reincarnated as a kid with no memory of his evildoings. HOWEVER, apparently Evil Loki annihilated the new Good Loki and took over his body, which I also missed, because I do not pay attention to Thor. HOWEVER, Evil Loki is trying desperately to stay Good Loki by going on James Bond missions for the All-Mother (which include picking up rogue Asgardians who “skipped out on Ragnarok”, among other things). And that, my friends, is Loki: Agent of Asgard. And it is awesome. (I’m only about 5 issues in. But they were 5 awesome issues.) I’m trying to put as few spoilers here as possible, but it is hard for this series. My only complaint is its confusingness for those of us who, as I keep pointing out, do not pay attention to Thor. I only picked this up in the first place because I met Kid Loki in Young Avengers.

It’s still technically running for a couple months. I’m actually putting this in my list solely on meri-I’ve only read the first issue of the reboot (which I loved). But the Fantastic Four are by far my favorite team, so I had to give this to them. I don’t care about the movie history, maybe the next one will be better. (Hopefully!)

This is the only non-Marvel or DC comic on my list, which means I should really diversify my pull list. I just read this in the collected editions at my local library. Anyway, the basic conceit is about a secret agency of psychics running the world. They’ve since disbanded, but some are trying to rectify that. What makes this series great is its Lost-caliber mysteries (in a blatant reference, it also starts with something mysterious on Flight 815), its level of page complexity, and its really, really cool psychic powers. (Example: there’s this one guy who automatically reads the minds of everyone within a certain radius-he can’t hear their thoughts, but he can predict the future. SO COOL.) MIND MGMT is one of those comics that is really hard to explain, but if you get into it you’ll absolutely love it, Every time. I swear.

I don’t feel that I should have to explain myself. He is Batman, and his series is fantastic. (Another one I only read in collected editions, it’s really starting to annoy me but there you go. I MOURN FOR YOU BELOVED LOCAL COMICS STORE!!) Mostly he is Batman (that’s kind of a lie, I’m there  for the Joker like everybody else, but there you go.)

And my favorite comic currently running is… 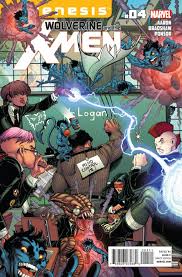 This comic. In contrast with all the dark X-stuff happening everywhere else, this is just some strange mutant children and their extremely confused headmaster out to learn how to function. (Wolverine had more stabbing, but whatever.)